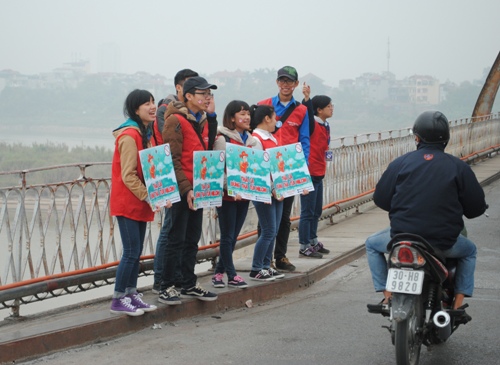 A few weeks ago, Vietnam celebrated an annual day to honour the Kitchen Gods. Right before Lunar New Year, legend has it that the Kitchen Gods ride to heaven on the back of a fish to report to the other Gods about how things are going down on earth. To mark the day, Vietnamese people release a live fish into rivers and lakes.

As with many traditions, the custom of releasing the fish has been given a modern slant. Men and women riding their motorbikes to work in the morning buy a fish in a clear plastic bag, and as they drive by a lake or river hurl the fish, still in the bag, out into the water. In some places, enterprising children stand by the shore to pluck the bags out and resell the fish to other customers.

What started as a quaint custom of setting an animal free has morphed into a national day of polluting waterways.

This year, I noticed something I hadn’t seen before. Riding to work across Hanoi’s famed Long Bien Bridge, I passed dozens of university students armed with hand-made signs urging people not to throw plastic into the river. It was a freezing day – the wind was particularly icy – but these students stood their ground,  smiling pleasantly and politely while ensuring it was only fish, and not plastic, that was tossed into the river.

How they were organised and where they were from is a mystery to me. All I know is that they saw an ongoing social issue and decided to take action, for no reward other than the satisfaction of making their city a little better.

On a much larger scale, something similar has been happening in Australia. Tens of thousands of people have been rallying around a call to “Let them stay,” a tag-line referring to people applying for refugee status who are shipped offshore to detention on Manus Island and Nauru. While the Australian government has a policy of sending all refugee applicants who arrive by boat to offshore detention, community opposition is increasing both in number and in passion. Protests are popping up everywhere: churches, hospitals, schools, unions, and of course social media is playing an active part.

These are two examples of everything that’s right with our world: people stepping up and taking action to right a wrong in their own community. Apart from the fact that such actions tend to lead to great results, there’s something inherently right about ordinary people accepting responsibility for the problems around them and trying to create change. Even if their action lead to no result at all, there is still real worth in trying.

Throughout our lives we see over and again that terrible situations can bring out the best in us. Think New York in the weeks after 9/11: never before had the city’s citizens come together with such unity. In my own life, I have experienced incredible support and kindness from people during times that I have been grieving or suffering some exceptional hardship. I see it, too, in the people I work with at Blue Dragon: it’s just a matter of course that people will work through the night, or travel hundreds of miles along bumpy roads, to rescue someone in danger or care for a sick child. A few years ago, when we were moving into our new centre in Hanoi and were overwhelmed with the enormity of the task, family members of the children we help came out in force to clean, scrape paint, and wash down walls. These are all people with their own serious problems, but seeing our need they didn’t think twice before volunteering.

This capacity to step up when there’s a need is a wonderful human characteristic. It leaves me wondering, though: why do we need a crisis to bring out such generosity? Is it possible that we could always stand up for others, and always go that extra mile to care for our community, even when there isn’t a major event to rally around?

Is it possible that we show the people around us that extra love and care in ordinary circumstances, and not only when they are suffering?

Imagine what our world could be like if we didn’t need a crisis to bring out the best in us.

2 thoughts on “Bringing out the best”